The building was formed according to a good plot analysis and the observation of the positive and negative aspects of the region's current situation. The heavy traffic of Basın Ekspres Road passing through the west part of the land and the resulting intense noise, the effective use of natural lighting, and the power lines located in the east of the land are factors that directly affected the form decisions.

A single prism located on the project land will not solve the mentioned problems. Regardless of its positioning, one facade will be exposed to intense traffic noise, and another facade will be exposed to the bad view created by electricity lines. When you pull back the prism to free it from traffic noise, its visibility from the Basın Ekspres Road used by thousands of vehicles will decrease, and the advantage of interacting with that many users will be unavailable. For this reason, the structure divides itself into two sub-parts with a diagonal cut. It provides a good perception in both ways leaning the parts on the opposite boundaries of the land, while its corners on the roadsides minimize the spaces that are affected by noise and exposed to electrical lines. The two sub-parts are not identical in this spatial solution. The core and shafts of one of the parts lean on the hypotenuse side and face north, while the other part leans on the long side and faces north. The use of natural light with maximum effectiveness helps passive air conditioning.

The building is not perceived as two different buildings but as a whole, consistent with the exit idea, thanks to the architectural touches on the facades. The two facade materials that create a strong contrast with each other express the "outside" (black) before the separation of the building and the "inside" (white) after the split. While the two sub-parts are perceived as a whole, they establish a rich relationship with the ground thanks to the social facilities, commercial facilities, and public spaces underlying them. The intersection plane forming with separation of this whole continues at the ground level and creates a slit. This slit connects different levels in the west and east of the land, while the positions of reinforcements let light reach from the slit.

Generally, the region consists of low-rise industrial buildings and workshops. In the short term, the region is predicted to turn into a settlement area with high-rise structures, and little will be left from its current state. Over time the facade material will wear and maybe rust out to a certain extent as a reference to the current situation by serving the urban memory in the area with no more industrial buildings.

Modular organization of the spaces and facade gaps ensures the functional continuity proposed by the project. Each space on the black facade contains gaps of three different sizes. In contrast to this composition of the black facade, the white facade includes a single module. The relationship of the spaces with the facade leads to the formation of a mathematical texture that appears to be randomly positioned on the facade. It will allow the formation of a similar texture on the facade even if the plans change in the future.

The strong contrast between the facade materials and the structures' positioning strategy offers different perspectives to users with very different vistas. Such change of sights between steps before leads to the formation of a cinematographic effect.

The triangular plan scheme, perceived as a problem at first, was evaluated positively from another perspective as it was used to create more livable spaces in the project. Hence, maximization of the facade and daylight offered to the user. As a result, this plan configuration brought about a very advantageous situation for small apartments of this size and in line with the user profile living in this area. 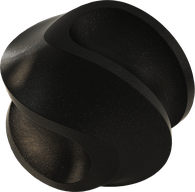 Please select the file format you want to download

This page uses cookies that are techniaclly necessary for the functionality of our website. Cookies and tracking mechanisms, which are not technically necessary to be kept, yet enable us to provide you with a better use experience... Learn More